The minor pentatonic guitar scale is a five note scale used often in rock lead guitar riffs and soloing, and is usually played over chord progressions that start with a minor chord.

There are 5 Minor Pentatonic Scale Patterns spread over the length of the guitar neck.

The A minor pentatonic scale is probably the most-used, most-heard, most-seen, and most-demonstrated scale in the rock guitar world. Video teachers use it constantly as the launching point for demonstrating all kinds of pentatonic scale ideas. A minor is a common key, and everyone’s favorite position for playing it sits nicely between frets 5 and 8.

As guitarists we tend to regard scales as patterns that can be moved up and down the neck depending on what key we’re playing in.We refer to these movable patterns as boxes or box positions.As an example, below is the minor pentatonic box, with the root on the 6th string.I use the minor pentatonic as an example because it is the first scale/box that most guitarists seem to learn. 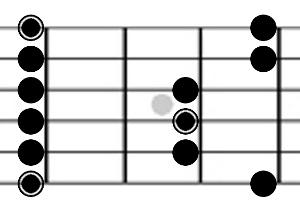